“A mobile is a very modest thing.”

Alexander “Sandy” Calder was born in Lawton, Pennsylvania on July 22, 1898 to artist parents. He had close relationships to his sister, Peggy, and his parents, and from early on was encouraged to pursue his creativity.  After high school, however, Calder enrolled in Stevens Institute of Technology and graduated in 1919 with a degree in Mechanical Engineering.

After holding a few odd jobs, Calder began studying at the Art Students League (New York) in 1923. The following year, he took a position as a freelance artist for the National Police Gazette, which at one point sent him to sketch at the Ringling Brothers and Barnum & Bailey Circus for two weeks in 1925. This became a formative experience for Calder that fostered his strong interest in circus and animal themes and eventually led to the creation of  his own show, “Le Cirque Calder.” Calder assigned himself the role of the ringmaster and fashioned a group of circus figures out of wire and leather (among other materials) who performed to the tune of Victrola music. Calder toured his circus in both Paris and New York, where it received high acclaim from audiences. While performing, Calder also attended the Académie de la Grande Chaumière (Paris) in 1926, and held an exhibition of his paintings at the Artist’s Gallery (New York) that same year. In 1928, his wire figurines were on display for the first time in a solo exhibition at Weyhe Gallery (New York). Calder expressed his enjoyment of working with wire, describing the practice as using “three-dimensional lines” to create “drawings in space.”

Calder socialized with a prominent array of artists and intellectuals while living in Paris during the latter half of the 1920s. One of these individuals was Joan Miró, a prolific artist with whom Calder shared a lifelong friendship. In 1930, Calder visited the studio of Piet Mondrian, and was highly influenced by the strong primary colors and geometric patterns he saw in the artist’s work. As a result, Calder’s own sculptures began to take on similar abstract qualities. The following year, Calder introduced moving parts in his work, thereby dividing it into two groups: “stabiles” (a term coined by Miró), which were stationary or motionless forms; and “mobiles” (a term coined by artist Marcel Duchamp), sculptures that incorporated movement. Calder was especially interested in mobiles, as they allowed him to forge a more palpable and active relationship between a sculpture and what surrounded it. When triggered, the sculpture in motion would interact with its environment, generating alterations in light, shadow, perspective, and more.

Although already internationally-known for his traveling circus and first solo show at Galerie Billet (Paris) in 1929, Calder acquired lifelong notoriety with his mobiles. He spent most of the 1930s creating these pieces which would become a signature body of work, and began a family with his wife, Louisa James, after the two married in 1931. The Museum of Modern Art (New York) honored Calder with a retrospective exhibition in 1943, and he sustained success through the 1950s when he received the grand prize for sculpture at the 1952 Venice Biennale. He spent most of the 1950s traveling, and was given solo exhibitions in New York at both the Solomon R. Guggenheim Museum in 1964 and the Whitney Museum of American Art in 1976. Calder passed away that same year on November 11. 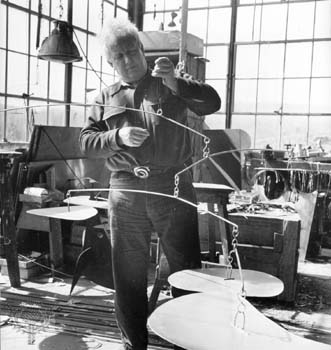