Sir Anthony Alfred Caro was born in New Malden, England in 1924. He found his love for sculpture through working in the studio of British sculptor Charles Wheeler throughout his education. He received his undergraduate degree in welding from Christ’s College, Cambridge, England, after which he studied sculpture from 1947 to 1952 at the Royal Academy Schools. Following a year spent in the Royal Navy, Caro established mentorships with artists Henry Moore and David Smith and quickly became enamored with modernism and abstract art.

Caro’s progression as an artist became evident in the 1950s and 60s as he began shifting away from his figurative work and towards constructing sculptures out of large pieces of metal. His process began with either welding or bolting these metal pieces together, which were then painted with a flat, bold color. By removing the bases of his sculptures, however, Caro lent the viewer an experience unique to its time: the ability to approach, inspect, and interact with the piece from all sides, angles, and levels.

Although Caro never lost sight of his own individuality, he welcomed personal transition and growth as the art world and his experiences evolved. In the 1980s, Caro’s visit to Greece proved beneficial as he reconnected with figures and plot lines familiar to his pieces. His influence and evolution evidenced his immense success in the later part of his career, as he became internationally-renowned in sculpture, drawing, design, architecture, and teaching.

Anthony Caro passed away in 2013 in London. 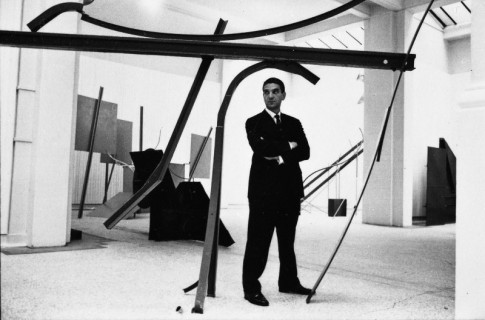