Bill Jensen was born in Minneapolis, Minnesota in 1945. He was one of the first artists to establish a studio in Williamsburg, Brooklyn, and came into prominence with “the return to painting” of the late 1970s and early 1980s.

Jensen’s mature works have been praised for their unconventional compositions and profound sense of color. In 1986, Jensen was included in a group show at the Whitney Museum of American Art in New York and held a solo exhibition at the Museum of Modern Art in New York. His works explore realms of the inner life through abstraction, creating an invented world referencing feelings from the real world without directly depicting them. “What abstract art can do is put people in touch with areas of their psyche they’re not normally aware of,” Jensen claims. “This world is where prejudice and wars do not exist. The I, the Me, the You, do not exist there. If you can bring people in touch with that for just a second, then you have a different way of looking at the world.”

Jensen’s works are in the collections of the Metropolitan Museum of Art (New York), the Phillips Collection (Washington D. C.), and the Los Angeles County Museum of Art (California).

He currently lives and works in New York. 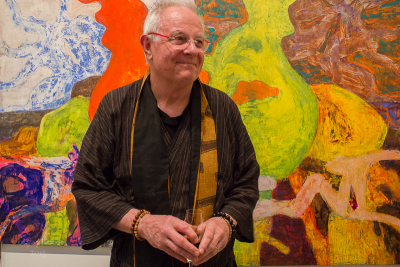