Guggi (née Derek Rowen) was born in Dublin, Ireland in 1959. He and his nine siblings were brought up under a strict, disciplinary, and fundamentalist Christian father, and a hardworking, kind-hearted mother who nurtured his love of drawing and painting from a very early age. Together with his childhood friend Paul David Hewson, more popularly known as Bono from the band U2, Guggi founded the legendary avant-garde goth/post-punk band The Virgin Prunes and sang vocals alongside Gavin Friday, David Watson, Jr., and others. The band’s uncompromising body of work and renowned live performances encompassed performance art, painting, and post-punk musical experiments, securing them a large cult following in mainland Europe in the early 1980s. In 1986, however, The Virgin Prunes disbanded and Guggi concentrated on painting full-time. His first exhibition was a four-man show with Bono, ex-band member Gavin Friday, and Charlie Whisker at the Hendrix Gallery at Stephan’s Green in Dublin, Ireland. In 1990, Guggi held his first solo exhibition at Kerlin Gallery in Dublin.

Guggi currently lives and works in Dublin with his wife, five sons, four dogs, and collection of unusual reptiles. 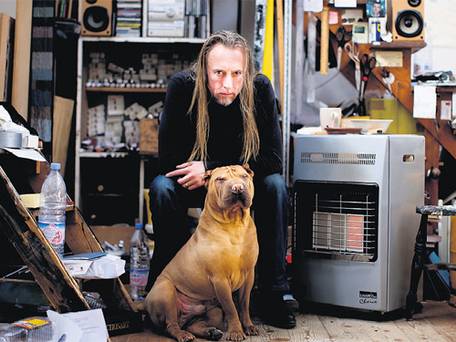