Hiroshi Sugimoto was born in Tokyo in 1947. After traveling through Russia and Europe, Sugimoto settled in Los Angeles in the 1970s where he began studying photography at the Art Center College of Design. These studies gave Sugimoto a technical expertise that is central to his work. His current preferred tool is a late 19th century/early 20th century big box camera with sheet film, as it achieves the highest technical result possible. With this camera, Sugimoto also prefers to use black and white film, rather than color film, as black and white reveals gradation and tonalities that would otherwise be lost in the latter.

Upon completion of his studies, Sugimoto moved to New York and began working on his photographic series. Understanding the idea of series and repetition is crucial to fully grasping Sugimoto’s work. The series is in its entirety is one work itself, with each photograph acting as a part of a whole. It is when viewing the series in its entirety that the viewer begins to refocus his attention and see the small differences that distinguish the individual images. Thus, the body of the series turns into a chain of links, in which the viewer is invited to compare and contrast one against the next. That is when the series becomes less about objectively documenting different scenes, and more about empirically observing them.

While each of these series share a common quality of repetition, they possess different moods and messages. For example, the compositional arrangement of Seascapes reveal two different types of influences – religious and historical art. In Seascapes, Sugimoto uses the horizon he had photographed to divide the upper and lower halves of the image equally, between the sky and the ocean. The result is a calmness and timelessness that emanates a strong spirituality towards the viewer. Sugimoto is able to convey this through the sublime image he created by using muted grays and withholding an easy-to-decipher subject from the image. Moreover, the spiritual effects Sugimoto creates from depicting the sea are also seen in works by past artists including Casper David Friedrich. This reference to past maters are also found in other series, such as Pinetrees. In Pinetrees, Sugimoto uses silhouettes in order to refer to the tradition of Japanese Ink Painting, specifically the 16th century artist Hasegawa Tohaku.

Not all series, however, draw ties to the past. Diorama and Theaters explore the concept of illusion. It is in these series that Sugimoto investigates the manner in which cultures tell their stories through visual means. This is ironically or purposefully similar to the way Sugimoto explores his culture in the same manner. 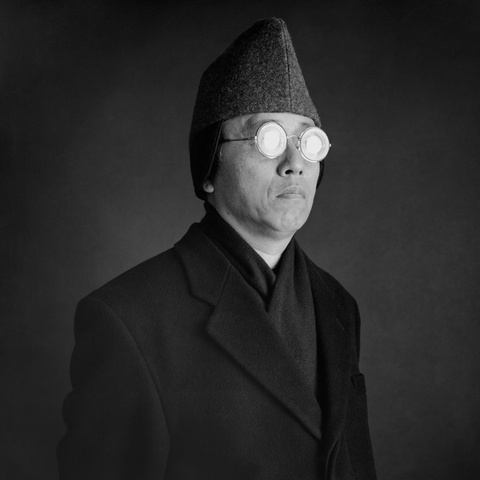