Upon completing her masters, however, Michell found herself back in New York and held a studio in the East Village from 1950-1955. During this time, she joined the Abstract painters and was greatly influenced by the work of Willem de Kooning, Franz Kline and Arshille Gorky. It was in this group that she developed her signature style of bright colors and expressive, gestural brushstrokes painted onto larger canvases. She had he first solo show in New York at the New Gallery in 1952, but moved to the Stable Gallery from 1952-1965. After 1965, Xavier Fourcade Inc, most prominently exhibited her work in New York.

Even though her work was frequently shown in New York, Mitchell moved to France in 1955, and spent the remainder of her life living in Paris and then Vetheuil. In Europe, Mitchell displated her work most often at Galerie Jean Fournier, Paris. This work often explored landscape scenes and nature motids, inspired by her country life in France and childhood winters in Chicago. While Mitchell received various honors and awards through out her life, a highlight was the honorary doctorate she received from her alma mater of the School at the Art Institute of Chicago in 1987. 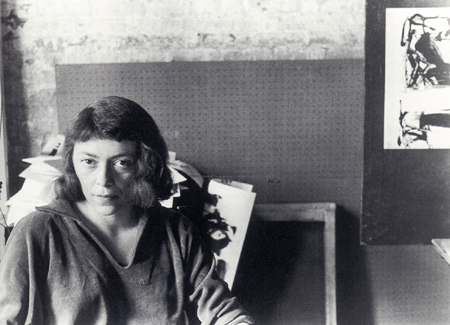