The son of an academic painter, Pablo Picasso was born in Malaga, Spain on October 25, 1881. When he was fourteen, his family moved to Barcelona, and Picasso enrolled in La Lonja to study fine arts. He was honored there with his first exhibition in 1900.

Four years later in 1904, Picasso moved to Paris, where he remained until 1947. Immersing himself in a highly artistic circle of friends, Picasso socialized with Guillaume Apollinaire, Max Jacob, Gertrude and Leo Stein, Ambroise Vollard and Berte Well. Artistically, Picasso’s time in Paris is characterized by different artistic periods and stages, the first stage being the blue period (1901-1904.) This period takes on a melancholic tone, as its main subject is Picasso’s depiction of the world of the poor. The following “Rose Period”, however, departs from this somber mood by moving towards less serious subjects, drawing material from subjects such as circus life. A whimsical quality is conveyed through the lighter colors Picasso used in the works from this time.

The thirties were an exciting time for Picasso, especially in 1932 when he held shows at Galerie Georges Petit in Paris and Kunthaus Zurich. This year also saw the publication of the first volume of Christian Zervos’ catalogue raisonné. This personal success, however, was darkened by the outbreak of the Spanish Civil War, and event Picasso responded to with the masterpiece Guernica (1937). The painting conveyed the stark anguish and brutality of war, and the attending critical acclaim resulted in an exhibition at the Museum of Modern Art in New York in 1939. More exhibitions followed, including one in 1955 at the Musée des Arts Decoratifs. In 1961, Picasso married Jacqueline Roque and the couple moved to Mougins, where Picasso spent the rest of his life. He passed away on April 8, 1973. 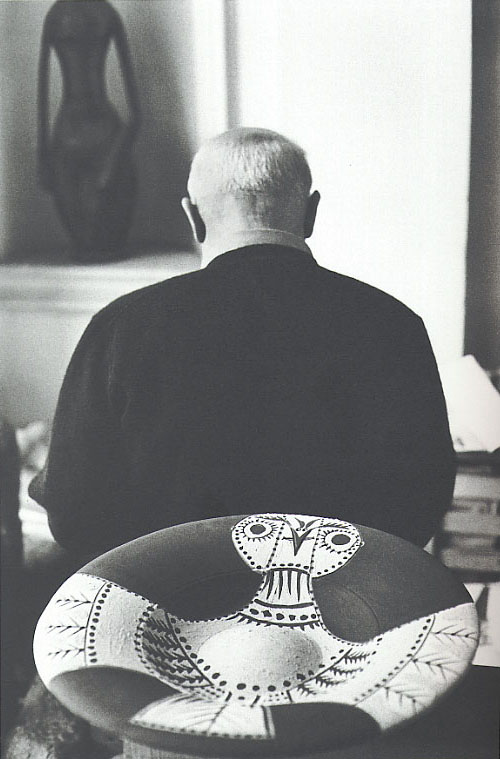