“I wanted to make Impressionism something solid and enduring, like art in museums.”

The son of a wealthy banker, Paul Cézanne was born on January 19, 1839 in Aix-en-Provence, France. Initially enrolled in the law program at the University of Aix in 1859, Cézanne developed an admiration for French realist artists Eugène Delacroix, Gustave Courbet, and Edouard Manet. Their influence on Cézanne’s early paintings are apparent in the artist’s use of dark tones that work to convey a realistic representation of contemporary life. In 1863, Cézanne’s work was included in the Salon des Refusés, which exhibited worked rejected by the Salon de Paris. Cézanne’s work continued to be rejected by the Salon from 1864-9 (only to be accepted once⁠—more than a decade later in 1882).

Cézanne’s fortune changed when he met painter Camille Pissarro, who acted as a mentor to Cézanne and introduced him to the Impressionist style of “en plein air” painting. Applying this new technique, Cézanne abandoned his darker palette and began experimenting with brighter colors to depict outdoor, rural scenes. He exhibited with the Impressionists from 1874-1877, but his work was not highly regarded nor commercially successful. In response, Cézanne distanced himself from the Parisian art scene and returned home to Aix, where he spent the late 1870s and 80s. During this time Cézanne denounced Impressionism, and began to develop an emphasis on structure and solidity in his work. These gestures gave rise to a new, Post-Impressionistic style, which helped usher in later art movements like Fauvism and Cubism.

In 1895, Cézanne met and developed a fruitful alliance with contemporary art dealer Ambroise Vollard in Paris. Together they showed and successfully promoted Cézanne’s work, which made its way for the first time into the 1899 Salon des Independents in Paris. Five years later, Cézanne exhibited in the Salon d’Automne and received a solo exhibition at Galerie Cassirer in Berlin.

After finally attaining the success he had been working toward his whole life, Cézanne passed away just two years later on October 22, 1906 in his hometown of Aix. By this time, however, he had developed a strong reputation and earned his continuing legacy as one of the progenitors of 20th Century art. 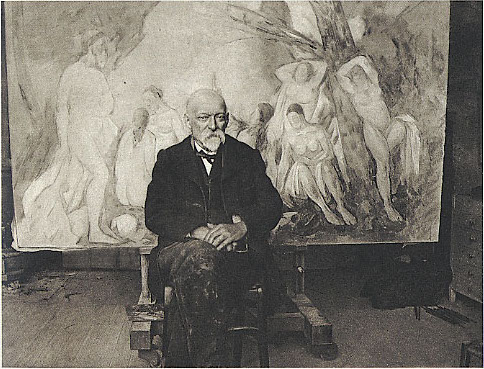