One of the leading ceramic artists in Japan, Tsujimura’s art and approach are founded on the beauty and purity of the earth and its relationship and transformation with nature and fire. Tsujimura’s creative and artistic personality is anything but conventional. In 1965, Tsujimura was inspired by a classic Ido tea bowl from the Japan Folk Crafts Museum, ancient Japanese and Korean technique and traditions, and from his own personal experience in the Zen temple of Sanshoji. Tsujimura’s work is based on a strict relationship with the past and his uncompromising individuality.

One of the beauties of Tsujimura’s ceramic work is his lack of formal artistic training, allowing purity into his creations. The individuality of his art and his own individuality as an artist can be summarized in his statement: “I have no teacher, and I take no apprentices.” He creates his own styles and techniques individuality, but they are always linked to the traditions of his past.

His studio, built in the mountains of Nara, is a mythical site and the birthplace of his creations. It is with the earth from his property that Tsujimura creates his own clay. He works it, fires it, and lets it mature with age and passing of time. Indeed, one can find buried ceramics, covered with vines and bamboo. These pieces age with time, illustrating the importance that Tsujimura places on the intangible quality of nature and the passing of time.

One of the greatest ceramic artists in Japan, Tsujimura is a perfectionist in his art and recognizes his obsession with achieving his goals. Tsujimura is incontestably, the most capable artist to create works of art that retain purity, respect and traditions of Zen, Japanese and Korean ceramic art of the past. 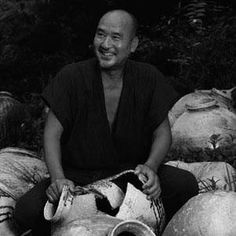