Architect Tadao Ando was born in Osaka, Japan in 1941, the first born of twin boys. Ando spent much of his childhood wandering through construction sites near his home, impressed by carpenter’s abilities to create sturdy, lasting objects with their own hands. Foregoing high school, Ando spent 1962-1969 educating himself in architecture by reading and traveling, since he believed it would best behoove him to see actual buildings rather than study them in class. This led to his tour in Japan of temples, shrines, and tea houses, and to Europe, Africa and the United States, viewing works of architects such as Le Corbusier, Ludwig Mies van de Rohe, Alvar Aalto, Frank Lloyd Wright, and Louis Kahn. In 1970, Ando established Tadao Ando Architect & Associates in Osaka at the age of twenty-eight.

Ando’s buildings reveal his main concern of integrating natural, organic elements with the general, necessary functions of a building in order to express human hope and spirit. They also reflect his interests in using architecture to explore ideas, thoughts, and relations within societies. This is evident from the manner in which Ando describes his work. He has said, “In all my works, light is an important controlling factor. I create enclosed spaces mainly by means of thick concrete walls. The primary reason is to create a place for the individual, a zone for oneself within society. When the external factors of a city’s environment require the wall to be without openings, the interior may be especially full and satisfying.” Ando’s materials (such as his trademark concrete and glass) and geometric simplicity reinforce this belief in all of his structures, whether they are homes, museums, or places of worship. Furthermore, although Ando has developed new architectural techniques, such as designing buildings with seemingly unfinished concrete surfaces, all of his works sublimely harmonize with the peaceful order that characterizes traditional Japanese architecture. 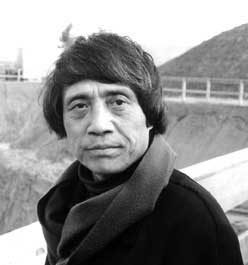