Willem de Kooning was born in Rotterdam country on April 4, 1904. During his youth, he enrolled in night courses at the Academie Van Beeldende Kunsten en Technische Wetenschappen in Rotterdam (1916-1925) while also apprenticing in a commercial art and decorating firm. In 1926, de Kooning came to the United States, first settling in Hoboken, NJ. He moved to New York the following year, where he met Arshille Gorky; the two later shared a studio.

During the early part of the thirties, de Kooning supported himself by working for the Mural and Easel divisions of the WPA Federal Art Project. His personal art reflected the influences of Surrealism and Cubism, which he was introduced to by Gorky. De Kooning’s exhibition career also began in this decade, commencing with his first group show at the Museum of Modern Art, New York. Two years later he created his first Women series, a theme he would continue to explore through out his career.

In the forties, de Kooning gravitated towards the New York School, associating himself with Jackson Pollock and Mark Rothko. This group evolved into the Abstract Expressionists, the style for which de Kooning is most famous. In 1948, de Kooning exhibited this style in his first solo show at the Egan Gallery in New York. During the next two decades, he created two more women series in addition to a Parkway series.

Returning to Rotterdam for the first time since he left, de Kooning was honored in a retrospective of his work at the Stedelijk Museum, Amsterdam in 1968. This was followed by the reception of the Andrew W. Mellon Prize with Eduardo Chilida in 1979, and a retrospective by the Museum of Modern Art, New York in 1997. De Kooning passed away that same year on Long Island. 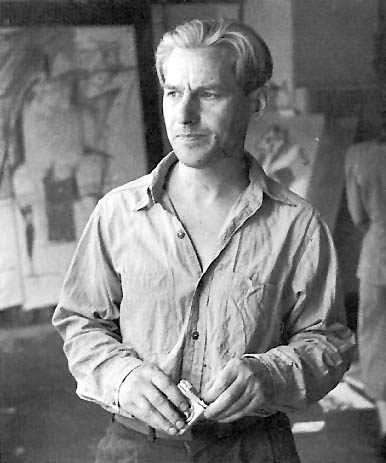