Yves Dana was born in Alexandria, Egypt on June 25, 1959. His family lived in Alexandria for generations, but migrated to Switzerland in 1961 when Dana was a young child. Dana received a BA in Sociology at the University of Lausanne, Switzerland and a MFA from l’Ecole des Beaux Arts of Geneva.

Throughout his life, Dana has always maintained a strong fascination with his homeland.  This nostalgic longing prompted Dana to travel back to Egypt in 1996, an experience that ultimately transformed his sculptural practice. While his earlier work consists primarily of iron abstractions that evoke associations to machines and instruments, in Egypt Dana began to experiment with stone for the first time in his practice.  Heavily influenced by hieratic art, Dana began his famous “Stele” series of sculptures, modeled after the ancient upright stone slabs engraved with designs and inscriptions.

Dana favors iron, bronze, and internationally-imported stone for his materials.  He has sourced basalt from Sweden, limestone from France and Turkey, serpentine from Italy, and diabase from Germany for his sculptures. Dana engages with these materials through a combination of innovative techniques and traditional tools, which allow him to achieve precise planar forms. Each sculpture is the result of a solitary and often athletic process of transforming the raw materials over the course of several weeks or months. Through this long and arduous practice,  unrefined base materials are crafted into sculptures that appear graceful, timeless, and serene.

Dana currently resides in Lausanne, Switzerland, and creates out of his studio L’Orangerie de Mont-Repos. 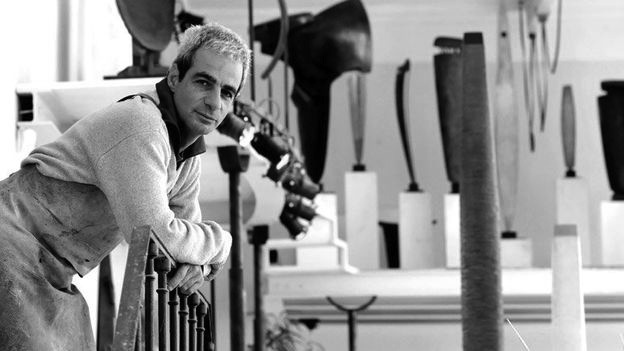